The Danish architectural firm BIG was able to produce several outstanding projects. Yet, this recent building completed in Philadelphia seems rather a conspicous mistake. Its shape tries to explicitly mimick the side wall of a ship, and it is meant to harmonize with the local port environment. Yet, that kind of sculptural enterprise represent a self defeating proposition, since it abandons the quest for poetry. Architecture’s purpuse is not to represent something, in a more or less sculptural way, but to host people in the best possible way.

We are in a period in which there are ships that are shaped like luxury condos or 5 stars hotels, and here we have now an office building in the shape of a ship… In this way, the inherent truth of an object, or of a building, is taken away, hidden behind the quest for pure appearence.

Here is the new Philadelphia building by BIG, accompanied by the words of the planners: but to us, this new building seems just a big mistake…

The investment management firm Penn Capital Management Company, Inc. has moved into 1200 Intrepid, BIG-Bjarke Ingels Group’s first Philadelphia building, developed by joint venture Liberty Property Trust & Synterra Partners. The dramatic building with a double-curved facade and gigantic periscope marks the second completion on American soil for the Copenhagen and New York City-based architecture firm. Last month, BIG celebrated its first finished project in the US, the mixed-use “Courtscraper” VIA 57 West, which has been named The Best Tall Building in the Americas by the Council on Tall Buildings and Urban Habitat (CTBUH) as part of its 2016 Tall Buildings Awards.

The 92,000-square-foot office building at 1200 Intrepid Avenue is located at the Navy Yard Corporate Center, a master-planned development within the Philadelphia Navy Yard. Situated between the Navy Yard’s basin and the award-winning Central Green Park designed by James Corner Field Operations, the four-story building inherits features from the circular park and Navy Yard master plan, as well as from the curved bows of the battleships docked a few blocks away. Penn Capital occupies 26,000 square-feet of the building’s top floor. The remaining space is still available for lease by Liberty Property Trust. 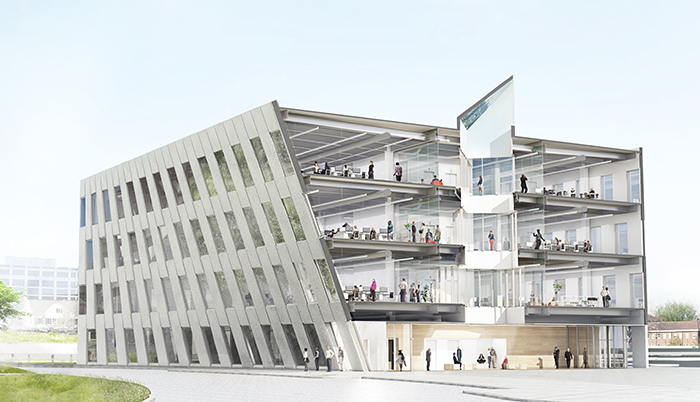 “1200 Intrepid now stands among the many uniquely designed buildings at the Navy Yard, and has been very well received by prospective customers,” said Brian Cohen, Vice President and city manager for building owner and developer, Liberty Property Trust. “BIG’s beautiful and thoughtful design provides its occupants a high performance and progressive work environment in a building which offers spectacular views and engages with Central Green Park. We are very excited to offer such an exceptional building in the marketplace for companies looking to relocate to the Navy Yard.”

Curved around the street on ground level, 1200 Intrepid’s front façade is created by the strategic stacking of High Concrete’s precast panels of varying sizes, figured in a basket-weave pattern to realize the top of the building’s straight edge. As the panels reach upward they also tilt outward, creating an inviting, cave-like canopy over the building’s front sidewalk. Each of the building’s other three sides stand straight up, maintaining the structure’s signature paneling.

Speaking on 1200 Intrepid at the award’s presentation, BIG Founder Bjarke Ingels revealed that the design was conceived as a compliment to the park’s circular running paths: “The ‘shock wave’ of the public space spreads like rings in the water, invading the footprint of the building to create a generous urban canopy at the entrance. The resultant double-curved facade echoes the complex yet rational geometries of maritime architecture. Inside, the elevator lobby forms an actual periscope, allowing people to admire the mothballed ships at the adjacent docks.”

In honor of the Navy Yard’s maritime history, 1200 Intrepid’s lobby features a periscope through which building tenants and visitors are offered a view of the ships docked in the water nearby. The building’s center is open all the way through to allow for maximum light exposure to each center-bordering office, and to represent an office-wide unity while maintaining each individual space’s privacy.

“In many cases, architects design big, boxy buildings that could be placed anywhere and don’t connect directly to the site. You would really be hard-pressed to place 1200 Intrepid anywhere else, due to how it connects with its surroundings. Our commission involved creating a speculative office building, for which no tenants were committed. The key challenge here was to create a reason for tenants to be here with the constraint of a stringent budget”, said Kai-Uwe Bergmann, AIA, RIBA, Partner, BIG.

The building has received LEED® Gold certification. Its precast concrete panels helped reach this goal by enhancing energy efficiency through their dense mass. High Concrete’s panels employ a variety of manufacturing benefits, including local manufacture using locally sourced materials, the use of recycled and recyclable content, and the reduction of construction waste.

“Building Beautiful, A collection of essays on the design, style and economics of the built environment”

Building More, Building Beautiful How design and style can unlock the housing crisis

The 10 great innovations that will change our cities – Carlo...